This was my 4th Byron race and after last year’s poor showing, I was determine to do better this year. Special thanks to Cristian for sending me the NEW Matrix light rim tires which were fantastic! And Protoform for making the VRS-N body, it was absolutely fast through the high speed corners, best body for this track! Mugen was not able to send me the new MTX6 in time for this race so I used the MTX5 for the sedan class. We also brought two friends Fabio and Mihnea from Shanghai to race with us this year. Fabio will be a freshman at Rutgers coming Fall while Mihnea (Canadian) is 14 years old and lives in Suzhou, which is about an hour from Shanghai. Mihnea just started 1/8th scale racing less than a year ago, and he is a pretty good driver given the short time into this hobby.

Qualifying went well for me as Ai did a great job with the car and I did not really have any issues at all. I managed to TQ both class and my lap times were solid, so it was just a matter of having a reliable car for the hour finals and tire strategy. Ai and I discussed tire strategy and decided to follow what we did two years ago when we won this race in the sedan class (We anticipated our key competitors changing tires). It was great to see fellow Mugen drivers Steve (Rossi) and Leandro both making the A-Main so we had 3 Mugen MTX5 in the Sedan finals while in the 1/8th scale class, I think we had 5 MRX5 in the finals, not sure but we did have quite a few cars making the A-Main. Anyway… the finals went as planned and for both class, I did not change tires for the hour race. For Sedan, my car felt good and my pace was consistent throughout, I had enough grip on the same set of tires and my competitors were not going faster after tire changes so I decided to stay out and finish the race on top. For 8th scale, Vincent Jackson was fast and pushing me, but his tire wear was obvious and he came in to change tires. I was informed that his lap times after tire change were similar to mine so I decided not to come in for tire change, but instead, asked AI to adjust my rear shocks higher to give more clearance at the rear. I managed to finish the race on one set of tires like the sedan class and took the win. Unfortunately Paolo Morganti DNS and DNF in both class, it would have been fun battling him like always! Fabio and Mihnea did well, especially Fabio who bumped up into the A-Main in 1/8th scale and finished A5!!

I would like to thank Bobbi, Joe and Ryan at Byron Fuel for all their support! This has always been one of my favorite races of the year and I’ll be back next year for sure! 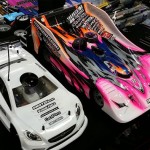 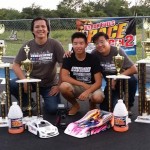 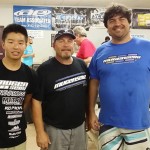