JJ with his trophy from the 2012 Byron World Challenge

2012 was a very successful year for JJ’s racing career. At 14 years old, he had 12 first place finishes and 9 TQ’s in both onroad and offroad classes, at races all over the world.

Some of his victories in 2012 include winning first place and TQing at the Byron World Challenge, taking first place at the Mugen Cup in China, finishing first in front of EC Kim from Korea and Atsushi Hara at the HPI Works Challenge in China, and taking TQ and winning both the 2WD and 4WD classes at the RCI Offroad Grand Opening race.

At the Super Grand Prix One F1 RC league finale, after 6 months and 6 rounds of intense racing, JJ was crowned the Grand Champion beating out over 78 drivers representing 27 teams. JJ was also the only driver to set a lap time under 15 seconds.

JJ dominated at the first ever Horizon Hobby Cup, taking victory in each of the 10-minute triple mains from pole position in the 4WD Short Course class, as well as securing the overall victory in the 2WD Buggy class. 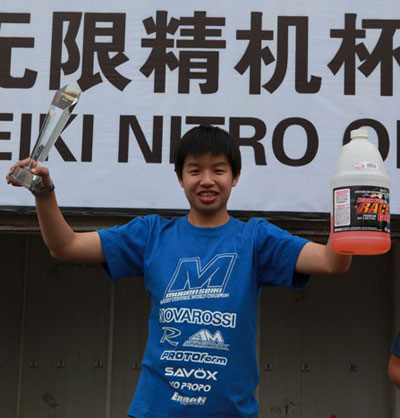 JJ with his trophy from the 2012 Mugen Cup in China

At the Nitro X Cup in Hong Kong, JJ took TQ in both the 1/8th and 200mm sedan classes, and in the 30 minute 1/8 A-main final drove his Novarossi-powered MRX5 to victory, winning by 2 laps over Hong Kong Shepherd driver Kwong.

The China Fortune Nitro Championships saw JJ beat out drivers from China, Hong Kong, Macau and Taiwan to win the 45-minute “A” Main final by 2 laps over second place.

Possibly the biggest highlight of JJ’s 2012 racing season was the China Nationals, held in Beijing, China. There he TQ’d and won both the 1/10 Sedan and 1/8 GP On-Road titles, making him China’s youngest National Champion at age 14. As if this wasn’t a high enough achievement for JJ’s first China Nationals race, he also had the fastest lap time of the week.

Other than his racing achievements, JJ also picked up two new sponsors that year, as he signed with Thunder power for motors and batteries, as well as switching to Byron Fuels.

JJ Wang on the podium at the 2012 China Nationals