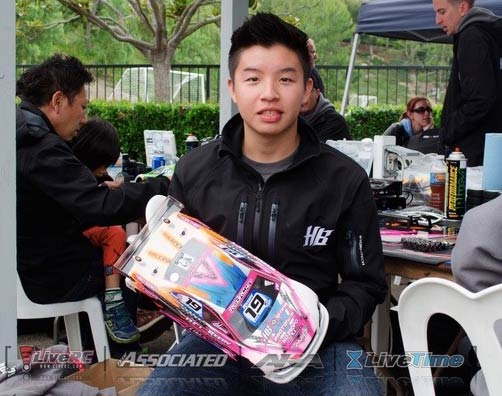 This is my second time attending the invitational class of the Reedy race of champions. I must say that this is one of the most exciting races ever. Because of its special 12 rounds of reedy style racing, it’s all about pure racing.

This being the first time here at the Tamiya raceway, it was a difficult start for me as I was not familiar with the high curves and the straight-away being in front of me. The practice was very limited as we only got 4 rounds of practice. My car started off not too bad but I just had to keep driving so that I get used to the track. The last 2 rounds of practice was when we really tried different setups to keep up with the pace. My car was on pace but I was looking for more overall traction.

The racing began the next day and I think that because everyone gets to start at different places on the grid each round, you need some luck. My first day was not that bad until I had one bad round so I knew I already used up one of my throw-away. Day 2 was a great day as I locked in my first ever win at the Reedy race. It was a great feeling as I started from pole and no one hit me. In the mean time, my PRO5 was getting better and better each run so I was confident about the ability of the car. Day 3 started off bad, I was hit multiple times, thus ending my chance of a higher final position as I already have my two throw-away rounds.

However, I also took my second win of the event which felt great.

Overall I ended up 11th place, I was a little disappointed as I felt that I had the car for a much higher position, but this is racing. The pro5 worked great for me this weekend, but I’m sure as a team we will come up with a great “base setup” so that for the upcoming races we will jump right into the mix early on. Thanks to the entire HB team for the support and laughter throughout the week. I had a really great time.