This race was perhaps the most frustrating race in my racing career so far. The entire week we struggled with overall package and there was absolutely no solution in sight. We had no pace and was clearly lacking traction compared to others.

In qualifying, I had 2 DNFs and 1 DQ due to being underweight. Flirting with not making the A Main, I had to turn in a top 2 overall finish in the final round of qualifying. I did manage to squeeze into the A-Main in 10th position on the starting grid. But overall, I knew I would not have the race pace to match Robert and Danielle’s pace. So, my goal was to fight for podium finish but it looked to be extremely impossible given Shimazaki and even the local Hong Kong drivers had a faster package overall.

When the finals started, I had a relatively clean start and went from 10th up to 6th. And after making the first few pit stops, I moved up to 4th. Shimazaki had engine issues and basically dropped out of podium contention but Marco was fast and so were Hong Kong’s top drivers Senna and Luk Chi Hung.

To get on podium, my strategy was to use only ONE set of tires while all others were on a tire change strategy. This was one of the toughest races I have been in, without a fighting package, I drove my heart out and finally finished in third place on the podium.

We struggled all week and with ENS Germany weeks away, I am very concerned about our ability to be competitive. Malick from Novarossi was there to support in Hong Kong as well as William from the US, but nothing really could have been done there at that time. Ai did a great job keeping me in the game and I was a bit lucky. But I never gave up, I wanted a podium finish and I got it at the end, so I was happy.

Post race analysis of the results, I found my pace almost half a second slower on average and I pitted 2-3 more times than everyone else. I was frustrated, but I was determined at the same time to fight till the end. I hope we are competitive in coming weeks! 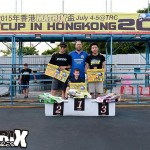