My expectations for this year’s electric race was fulfilled as I made the top 20 in what was a very difficult race for me as well as Team HB. As most of you know, the team had been developing the new car for over 6 months prior to the Worlds and really we did not have enough time to test. I signed up for the 12th scale Worlds but because of school, I could not make the race and flew into Florida the day before ISTC event started. The team also arrived about the same time and it was the day before ISTC that we received a completed prototype of the new car PRO5. So basically, Andy and I ran the car at the Worlds for the very first time! Overall, the car performed well for me.

I did well at the US Nationals on this track but the layout was changed and getting the complete PRO5 for the first time the night before the Worlds, I really did not know if we would be competitive. Haratune and I discussed the setup the night before but we simply needed to put the car on the track to know if it worked.

During Practice heats, I was not trying to do much but find the setting and get used to the layout, so lap times were not important. Haratune had two cars prepared so we were able to split the heat time to try different things on each car.

When Qualifying started, we found a good setting and after round one, I was 11th which surprised many. The PRO5 was competitive.

But Day 2 Qualifying was a different story. Both Andy and I struggled all day with all rounds because the track condition changed and our car did not perform the way we expected. Apparently, VHT was sprayed on the track and the overall temperature of the day went up making the track condition very difficult.

With one last qualifying heat left, I was lying 23rd and in order to make the B Main, I would need to score a top 15 run in the final round to make it. I finished 11th overall in the final qualifying round getting me into the top 20 and B Main.

In the Finals, I did well having 2 clean runs and finished 15th overall in the World Championships.

I was happy with my results given the competitive level and running a brand new car for the first time. Andy and I saw this Worlds more of a development race for us as we were really not expecting much. But the PRO5 did not disappoint, in fact, we were very pleased with the performance and look forward to finalizing the car a little bit more to make it even better. A Big thank you to Haratune for giving me a good car to fight, I look forward to the 2016 Worlds in Beijing! 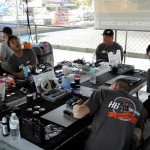 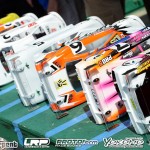 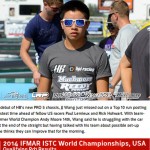 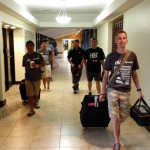