Coming into the Pre-Worlds after the previous warm up race I was curious to see how the new harder compound tires (F45/R45) would work on this track. When I got there, it was obvious that the track conditions had changed and the fastest lap time never got lower than 14.2 while I did a 14.0 a few months ago. The traction got worse or rather, much higher and tires would come off with a black layer of oil with a gummy, sticky feel. But… all drivers dealt with it as it was what it was.

It was good to have Shimo there as I was no longer the lone Mugen MTX6 driver so there was someone to bounce ideas off of. But the track condition was such that every driver had issues and everyone had different setups so it was really just reference information from each other. My qualifying was disastrous, DNS x 1 and DNF x 2. Total 6 rounds of qualifying where 4 best are taken for points system, I pretty much was out of contention to make the semi-finals. But my final qualifying run was slightly decent and it squeezed me into the semis!! Lucky me.

In the finals, I had all sorts of problems after 10 minutes. The first 10 minutes I was very much on pace and moved from 7th to 4th and was on pace but after a traction roll, the car never behaved the same again. 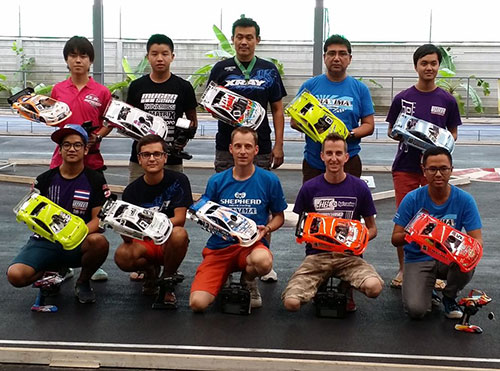 My rear belt also came off which took Ai 3-plus minutes to fix, and after two more mechanical issues, my race was basically finished. But I didn’t want to quit, I wanted to finish which I did.

Not the best way to end a Pre-World but I have more knowledge now about how this track works and how it changes so rapidly through the day. I fear that the Worlds will see even higher traction with more cars running… and this will be a challenge for everyone.

It was great to see my Novarossi teammate Silvio, and many other rc friends.

See all of you again in November!!