Since the Fullthrottle speedway, host of the 2014 Electric Worlds was just 20 minutes away from Snowbirds, we decided to join Marc Fisher (Serpent Factory Driver) to test at the Worlds track. Track owner George Martinez was kind enough to prep the track and Marc and I each ran about 10 packs of Lipo and got a feel for the track. First impressions, its HUGE! This track was actually designed for 8th scale nitro racing so its big for electric, and a few corner had some blind spots which needed to get use to. We were able get a few sets of the Worlds control tires to test and they were ok, the track itself needed to have more traction and Marc and I did not bring the right body to use so this session was really just to get a feel of the track and environment. Hayato and other Japanese drivers also came over to take a look but did not run. We were told the night before that 12th scale was moved back indoors to a carpet track, I think this was a wise move because Fullthrottle is just way too big to run 12th scale. Anyway… Big track but looking forward to run here at the US Nationals end of July and then the Worlds in October. 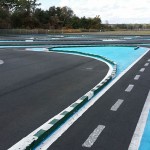 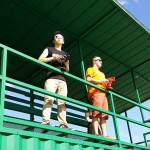