I attended the Snowbirds 2014 and I have to say, it is a crazy but super fun race. I have learned a lot throughout this race and I have tried many different setups on my car. The tires this time were a bit harder than usual so it was difficult to get the grip we wanted. The track conditions kept on changing everyday so that also made it hard for me to find the ideal setup I wanted. However, I am very happy with the cars performance throughout the weekend and I have an updated setup that I used at the snowbirds.

Here is my race report:

Arriving in Orlando, I was really looking forward to this race I’ve heard so much about, 24 hour racing, no way! But truth is, it’s a 24 hours non-stop event! I hardly got enough sleep waking up at 3:30am to make the 4-6am practice session. I really needed the track time because you simply don’t get enough. Andy was racing in Europe at ETS so it was up to me to put a HB chassis into the A-Main. My car needed some time to find the right setting but once I got comfortable, it was just a matter of putting in a clean run, which I didn’t really do. But nevertheless, got into the A Main in 5th position after for 4 rounds qualifying.

For my 1/12 scale, I recently signed with VBC Racing and this was my very first time racing 12th scale and I really didn’t know how things would go. If it weren’t for Max Kuenning and Dave Ehrlich from Team VBC USA, I don’t think I would have finished a single run. Those guys are great and I am very thankful! 12th scale is really FAST and running 8 minutes feels like forever. On my very first run, I think I blurred out after 5 minutes and with final 3 minutes to go, I couldn’t see very well and had to guess when to turn in on the sweeper. It was crazy fast but fun and I like it. After a few rounds, I got use to it and its not as hard as I thought. I did not make the A-Main this time, but overall, I was pleased with my first 12th scale outing.

In the Sedan finals, I had high expectations for myself because I knew my car setup was good and I had the speed. But unfortunately, I got hit right off the starting grid and body tucked, which put me last and I had to chase. I was actually gaining quickly and moved up to 6th before DNF with car damage. It’s a bit disappointing as I had what it took to get a podium finish, but that’s racing. Overall, I felt competitive and I had a lot of fun, not much sleep, but lots of fun!

I had a great time meeting some new friends and seeing old ones. Felix Law came up to visit and it was great to see him. Paolo also flew up with his family, nice to see a nitro guy around. But I had the pleasure to meet a fellow HB driver Chris Vogan. Chris is a very good driver and made the A Main in Stock, he and I had a good time discussing TCXX setup. In fact, we teamed up as “Team SMASH” and won the annual Figure 8 race!! Crazy stuff!

Snowbird Nationals was a great experience, I will definitely do it again! 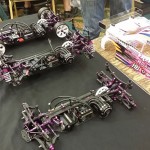 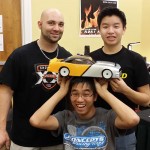