It was with mixed emotions going into this race as this was the final race at my home track RCI. RCI was a high grip indoor asphalt track which really helped my driving improve and through the two years, it hosted many local races as well as international race such as this year’s AOC opening round. I will miss this track, and my pit room but I am also very excited about RCI Version 2 as many here have called it. RCI V2 will be a newly built indoor CRC Carpet track right next to a newly built astro turf off road track. If all goes well, I was told the new track will be completed in January.

As this was the final race, many top Chinese driver came. Fei Zai Wei and Feng flew over from Southern China to participate and others flew as far as from Beijing to join us. China’s former National Champion Motor Wang of TOP racing and my fellow HB China teammate Rocket Zhang were also racing. To keep this report short, my TCXX setup worked great and my pace was fast, I TQ’d and took A1 with Rocket coming in second and Jimmy Qian in third. Final podium finish, final race at RCI… A good end before a new beginning. 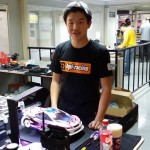