I was really looking forward to this race as the Yatabe Arena is perhaps the best race facility in the world. Masami was really nice to pick us up at the airport and the hotel was nice too. I love Japanese BBQ!

Here is my race report:

I raced two classes at this race and there were many good international drivers not to mention very good Japanese drivers racing. In the modified touring class, I had a relatively good free practice session but my overall times were a bit off. Because my teammates Andy and Shin was also there, it was good to share setup information. HB TCXX Chief designer T-Hara was also there and Hiro flew in from the US. When control practice started, I was put into the second fastest group which had some really really good international drivers. I felt I was on pace but the car just did not feel perfect.

When qualifying started, the first 3 rounds was disastrous, the car just did not feel right. But then T-Hara identified possible problems and once it was corrected, the car felt great and my results became very competitive. But by then it was a bit too little too late as I only managed to qualify into the B Main top 3. I was with good company and at this level, it was still difficult to win the B Main.

In the B Finals, I had a great start and run and finished first, and the second B Main final I finished 3rd. At the end, I finished B2 or 12th overall. I cannot say I am happy with the results because I felt if I had fixed my problems early on in qualifying, I had a chance to make the A Main. But nevertheless, it was fun!

I also decided to run the FWD class as my sponsor 3Racing sent me the New 2014 SakuraFF prototype car. I was pretty dominant throughout this class because there was only one group and mostly local Japanese drivers. The car was perfect and I took the win easily. I think this Chassis is a really good one and 3racing made huge improvements over the previous model. The local Japanese RC Magazines also took my car to take pictures and I was told many people were amazed at the performance of this car.

Anyway…. I had a lot of fun and people are just so friendly. I want to thank team HB and my Team Manager Hiro for promoting me to the HB Global Team. I am looking forward to working the Hiro and doing my best for HB Racing. I also want to thank my new sponsor Reedy for providing me with the power to compete. Thank you. 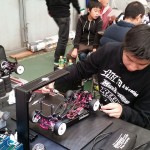