Well, I just got back from the Worlds and I have to say, I am a bit disappointed with my results as I felt good all week with my driving and felt I could have made the semis this year. Some bad luck also this time but we take from this race some real positive things and 2 years from now in Brazil, I hope to do much better. I want to thank ALL my sponsors for supporting me all year as well as at this race. In particular, my thanks to Mugen Seiki for their support and encouragement; Matrix tires and Cristian’s personal commitment for giving me the best tires to compete this time; and most thankful to Malick from Novarossi for coming all the way from Italy to show support to ALL Novarossi drivers. Results might not be as good as I wanted, but I had a lot of fun and it was great to see all my friends again, especially Team USA and Team Taiwan buddies. Here is my race report:

Control Practice:
We had some bad weather so practice time was cut back. My car needed a couple of rounds to find the right setting but overall, I felt pretty good and my pace was acceptable given the familiarity of the track. Matrix tires felt great and we were competitive with Zac, which 80% of the drivers were using! After the final rounds of practice, I got regrouped into the second fastest group, funny how my EP teammates (HB) all ended up in the same group! Hara (ex), Andy and Teemu. Being in this group gave me a good shot in Qualifying as the overall pace was fast.

Qualifying:
My first run was decent and landed me 13th overall after round one with a two stop pit strategy. The second qualifying was definitely the “Rocket” round and I gambled with a one-stop strategy but fell short and flamed out twice during the round. If I had gone with a two-stop strategy, I think I could have made 35 laps in the mid time giving me a top 20 result overall, but instead after all 6 rounds of qualifying, I placed 28th making only the Quarterfinals. All guys ahead of me were on a one-stop strategy, including several of my Novarossi teammates! But overall, I drove well, the car was great.

Finals:
I was hopeful to bump up given the way I drove all week and even when I know I had to come in for an extra pit stop, Ai and I did the math and as long as I could stay up front with the pack, I had a shot at bump up. But sometimes in racing, things go wrong and for me, when my race started, a flame out at the starting grid! After Ai brought the car back to the pit to restart, I was already 2 laps down. I did my best to chase and my fastest race pace lap time was right up there with the top guys. But at this level, it was impossible to make up the 2 lost laps no matter how aggressively I drove. Although disappointed for not being able to bump up into the Semis, I take away from this Worlds Championship lessons learned and experienced gained. I am thankful to be able to get support from my sponsors to perform at a World level and thankful for just being able to attend the Worlds. Thanks to my Dad and Ai and (Uncle Ben) for being there with me, and it was great to see ALL my racing friends from around the world. I had a lot of fun and I look forward to Brazil in 2015!

My World’s Set Up will be posted soon for those of you interested. 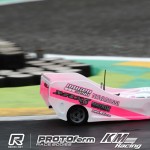 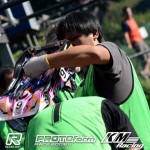