We arrived in Joliet on a Wednesday and hoped we could get some run time on Thursday to get ready, but the track was quite dusty so there was no point to really run much. Friday afternoon, most of the guys arrived and the track had good traction to practice on.

For Sedan, I was really hoping to defend my title and after the practice on Friday, Ai and I felt we did not have a competitive car as our setup was not the best on this track this year. So we made some adjustments and hoped on Saturday morning, we could practice and fine tune. For 8th scale, my car felt worse and again, Ai and I decided on the setup after Friday’s practice.

On Saturday, before qualifying started, I had some time during control practice to test the setup and my cars (Both sedan and 1/8) started to feel drivable. I was relieved but a the same time felt my key competitors were in better shape, so it was fine tuning time and we needed to quickly find solutions to make the car better.

Qualifying was mixed results for me, last year I TQ’d 8th scale but this year, it was Sedan that went well for me as I ended 3 rounds of Qualifying at provisional TQ but my 8th scale was a nightmare. I did not run my 3rd qualifying in 8th scale due to servo issues and so my overall results put me in the B Main.

Final day qualifying was tough, my sedan ran well but DJ was faster, I was able to keep my TQ for the class as DJ’s times were just off on a slower track. For 1/8, the car was good until I made an error, which ended my session so I had to start from the B Main to bump up.

In the Sedan finals, right off the starting line, I have power loss and could not hold the cars behind me so I had to let them pass me. 4 minutes into the race, with the car not shifting into 2nd gear properly, it was just difficult to drive hard and I clipped a curb and crashed out. Ai tried to get me back on the track but after 5 minutes, he was still in the pits and that’s when I decided the race was over, so DNF. I was disappointed but it happens.

For the 1/8 Final, the weather forecast was calling for rain and so the organizers announced that the race would be official after 30 minutes. Starting off the gird in Car number 11 (I bumped up 1st from the B-Main), my strategy was to drive hard to get to the front as quick as possible in case it rained after 30 minutes. I wanted to be in the front so if the race was officially called, I would be in podium position. My car ran great and quickly I moved to 2nd place behind DJ. But after a few hits with back markers and a mistake, which took me to the boards, I had damage to my car (Rear Body Mount was broken off on the left side). I drove hard with the damage and was moving up again in 5th place but after 22 minutes into the race, the rain came down and race was called. Based on the rules, final results will be based on qualifying results. I drove hard because I knew the rain would come down, but maybe drove a bit too hard causing damage to my car. But the car felt great before damage, setting was perfect.
Overall, can’t say it was a good race for me, I have pace, the car was good, but driving a bit too aggressive perhaps. Can’t wait till next year, I really like this race and the Leisure Hour track!

It was great to see all the Mugen guys especially Robbie who made the trip from California. Also Happy Birthday to Paolo, we had a good time hanging out. The biggest shock this weekend was my Dad, didn’t think he could drive the way he did. A5 for GT Class, not bad at all! 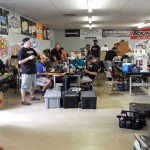